A.L.Martin & Sons have owned this shop for over 30 years. 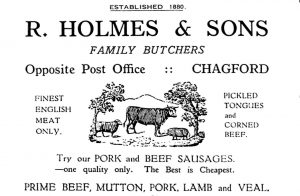 An advert in an early Chagford Guide confirms that R. Holmes & Sons business was established in 1880. Richard was followed by two sons, Charles and Frederick. Other owners were Hext of Chulmleigh and Seppings of Chudleigh who also had two shops in Moretonhampstead. Others who worked here were Harold Rowe, David Dymont, Zach Mortimore & Dennis Wannell. 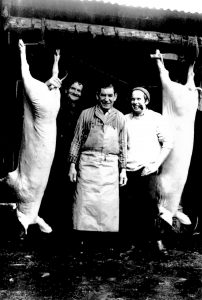 Photograph of ‘Zach’ Mortimore (centre) and an unknown man, with Joe White (left) at Batworthy Farm. By kind permission of Chris Chapman.