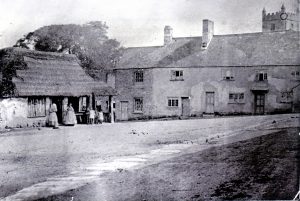 Pie Corner’ & the Shambles circa 1862. With kind permission of Bowden’s Museum.

The Tithe Map of 1841 shows cottages here including the Royal Oak Inn, were owned and occupied by John Hooper. Note the Gutter [partially covered] running down the street. Parish Council Minutes  from August 1896 note that: ‘The District Council be asked to cover gutter and replace gratings over the sandpits in the Square with cast iron covers as unpleasant smells often arose from them’ ! The 1851 Census gives the address as Pie Corner. These properties were demolished and replaced by the present building in the early 20th century. A clothing store started as B.A. Collins and the house named Collingwood. 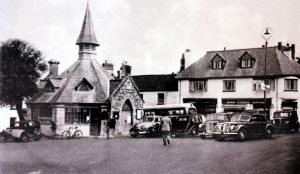 ‘Fowlers’ and the Market House’ circa 1950s. Source: the late Marcia Coombe.