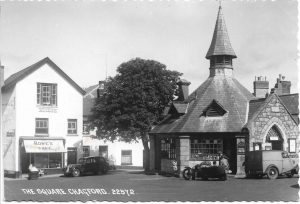 In the Middle Ages the small moorland towns of Chagford and Moretonhampstead, which lie just five miles apart as the crow flies, vied with each other for dominance over trade in the North-East corner of Dartmoor. In the early thirteenth century (1219-1220) Moreton’s landowners sought to establish their town’s exclusive right to hold weekly markets in the area, much to the anger of the parishioners of Chagford. Fortunately for Chagford, the case was lost, and its market continued to thrive, helped by the booming conditions in the district’s tin industry. 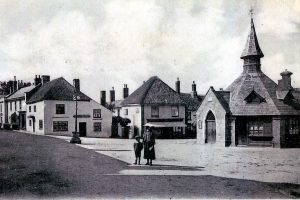 Chagford’s Stannary Court, responsible for overseeing the tin trade across vast swathes of north and east Devon, stood in the Market Square from the fourteenth century. But neither it, nor any of the square’s other medieval buildings, survive today. The impressive Bishops House on Lower Street, just to the north of the Market Square, comes closest. This was long thought to date from the fourteenth century, but expert opinion now puts the earliest possible date at c.1500.

Along with the parish Church of St Michael’s, Market Square would have represented the civic heart of medieval Chagford. Agriculture was the district’s life-blood, but the booming tin trade also brought money, people and occasionally trouble to the town in ways that must have radically shaken up the rural calm and isolation of previous centuries.

In 1530 Henry VIII granted Chagford the right to hold two annual fairs and confirmed the town’s historic claim to hold a weekly market. A little later the town’s parishioners bought these rights from the Lord of the Manor for £20 – a princely sum in the sixteenth century. Henceforth, the proceeds from Chagford’s market and fairs would accrue to the town itself, rather than just to its principal landowner.

By the nineteenth century there were four annual livestock fairs in the town. These were major events which brought farmers and traders from some distance. The buildings around the square would still mostly have consisted of ancient thatched cottages and workshops, and an open sewer still ran through the centre of the square (see drawing from 1810).

The arrival of the railway at Moretonhampstead connected Chagford to the wider world in new ways. Tourism increased considerably, and gradually many of the properties around the market square began to cater for these well-to-do visitors. Cottages and workshop were converted to shops and cafes, while ancient pubs transformed themselves into coaching inns able to cater for travellers keen to explore the nearby moors.

By the 1860s the old thatched market building, known locally as ‘The Shambles’, was beginning to fall into severe disrepair (although this may not be the origin of the name, since in towns across England ‘shambles’ was the name widely given to market-place slaughterhouses).

As these two images illustrate, the dilapidated building was no longer felt to be in keeping with local traders’ aspirations for the town as an upmarket tourist destination. In 1862 The Shambles were finally pulled down and a distinctive new market house – the current octagonal structure – was built by local craftsmen.

Market days and livestock fairs continued, but by the inter-war years tourist traffic was beginning to clog the square in summer. Where children had once played, cars and motorbikes now dominated – at least during the tourist high season. This is a feature of town life that has changed little in the intervening century, although parking restrictions have doubtless become more draconian.

In 1985 the Market House was painstakingly restored at considerable expense. It continues to provide a focal point to the town to this day.