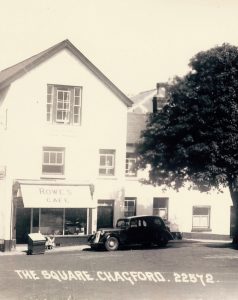 The Pepperpot Gallery, The Birdcage and Thomas’s formed one business, a Bakery, before 1900, when George Rowe bought from John Hill, a Baker in the 1901 Census who is listed as a Blacksmith in 1891. A second floor was added to the building and the middle floor became a Tea Room and Function Room ; the back and upper floor a flat. George’s son Dick Rowe, a Baker who also trained as a Confectioner, ran the business from 1946 to 1967. The big oven was used to cook turkey and geese for people who brought them in at Christmas. George and Esther Miller followed, then their son Norman and his wife Glynne. In the mid-90s the property was sold and divided into the three businesses we see today. 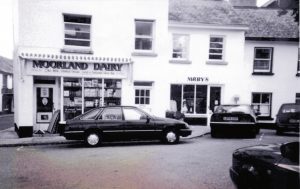 The Gallery once housed the Moorland Dairy; the Birdcage was once ‘Mary’s’, a clothes shop, then Godolphin Fine Art Gallery, then a bookshop. The new Baker’s shop Thomas’s was created in North Street. Local sources, which will be available for the whole community to see in the new Heritage Centre, were helpful in teasing out information on this site. Sue Price remembers her grandmother telling her it had been known as Murch’s Tenements. The 1841 Tithe Map and Apportionment confirm that George Murch and ‘others’ lived here. The 1841 Census tells us that George Murch was a Blacksmith.