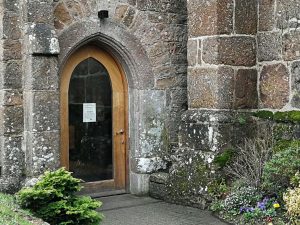 The North West Door: this is now the main entrance; the ancient door was blocked up in the mid-20th century but was reopened in late 2006-2007 during reordering of the west end of the church with a new glass-panelled oak door.

The Tower is 15th century, 69 feet (21 metres) high, in the perpendicular style, built of ashlar granite in three stages with an internal stair turret in the south-west corner. Originally it had pinnacles at the top corners (see here) but these were removed and now it is just battlemented. The west window was previously said to contain 13th century stonework but is now thought to be part of the original 15th century tower. For more information on the bells go here.

The West Door is an imposing double oak door which has recently been renovated; the latin inscription reads: May the Peace of Christ be to this house and all who dwell herein – here is rest. 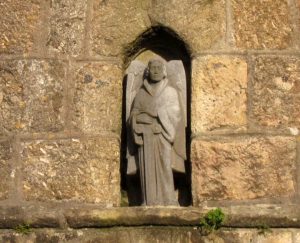 Above the door is a statue of St. Michael, the work of John Skeaping, RA. who lived locally and was responsible for the sculpture of Hyperion at the entrance to Ascot Racecourse. It is a memorial to a former rector, Alexander Goudge. A memorial plaque to the right of the south porch door records this. 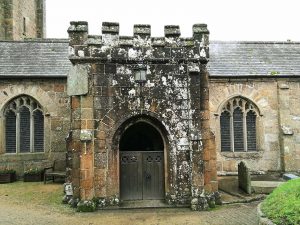 The South Porch is 15th century, with an original interior, a stone-flagged floor with stone benches and a lime-washed vaulted roof with excellent carved bosses. Traditionally this would have been the main entrance. To the left of the door is a late-17th century slate sundial, its borders enriched with scrolled foliage and garlands. There is a fine lantern over the porch. 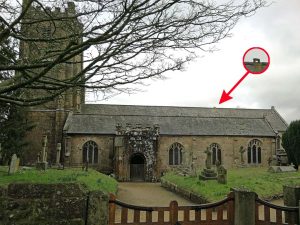 There is a headless animal on the ridge of the roof, marking the division of the present nave from the chancel. When the church was extended it may have marked the end of the building before the addition of a sanctuary. It is thought to be a lamb, regarded by some as a Christian symbol associated with tin. 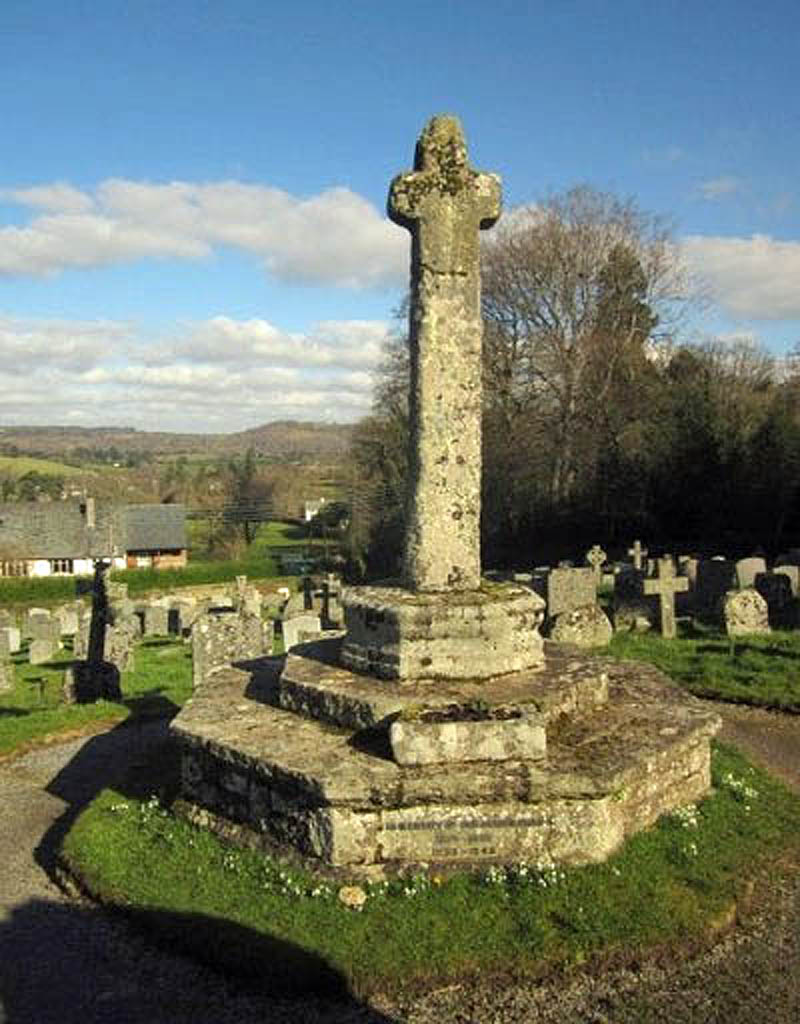 The church stands on the hill from which one can look east over the town towards the Teign valley. The “old” churchyard surrounds the church itself while the “new” churchyard extends east down the hill and contains the War Memorial, the base and top sections being made of two crosses which formerly stood in the Square. Here there is a welcome bench on which to rest with an excellent View of Castle Drogo and the Teign Gorge. Surely this churchyard has one of the finest of British views! 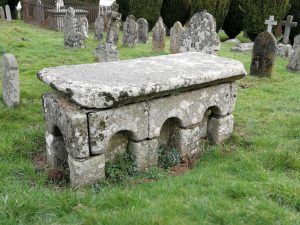 0n the bank to the North side of the church is the “Roman Altar” which was dug up in 1862. Its origins remain obscure. Mr. Caroe, M.A.,F.S.A. said in his report of 1912: “In fact it must be late Saxon or very early Norman work and without doubt it is the stone alter of Chagford church. We do not know of a more perfect specimen of an ancient alter in Devonshire. It is, therefore, the most valuable and ancient (Christian) treasure belonging to Chagford”. Other authorities differ from Caroe’s opinion, preferring to think that it was a 16th century tomb.

There are graves of many notable people, including the artist William Morrish who died in 1867, James Perrott, the famous  Dartmoor guide who set up the first Dartmoor “letter-box” at Cranmere Pool, and of the Berry family who built the former woollen factories of Chagford in the 19th century.

The external floodlighting of the church was installed in 1939 in memory of Major General Walkley who lived locally and was a faithful supporter of the church. A plaque to the left of the south porch door commemorates this. 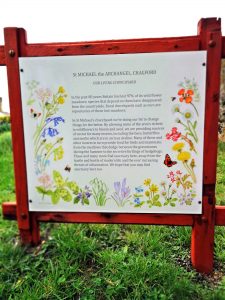 Today part of the graveyard is managed as “a living churchyard” to encourage wildlife and biodiversity, encouraging wildflowers insects, birds and mammals.