Click on or near a number on the map for more information. 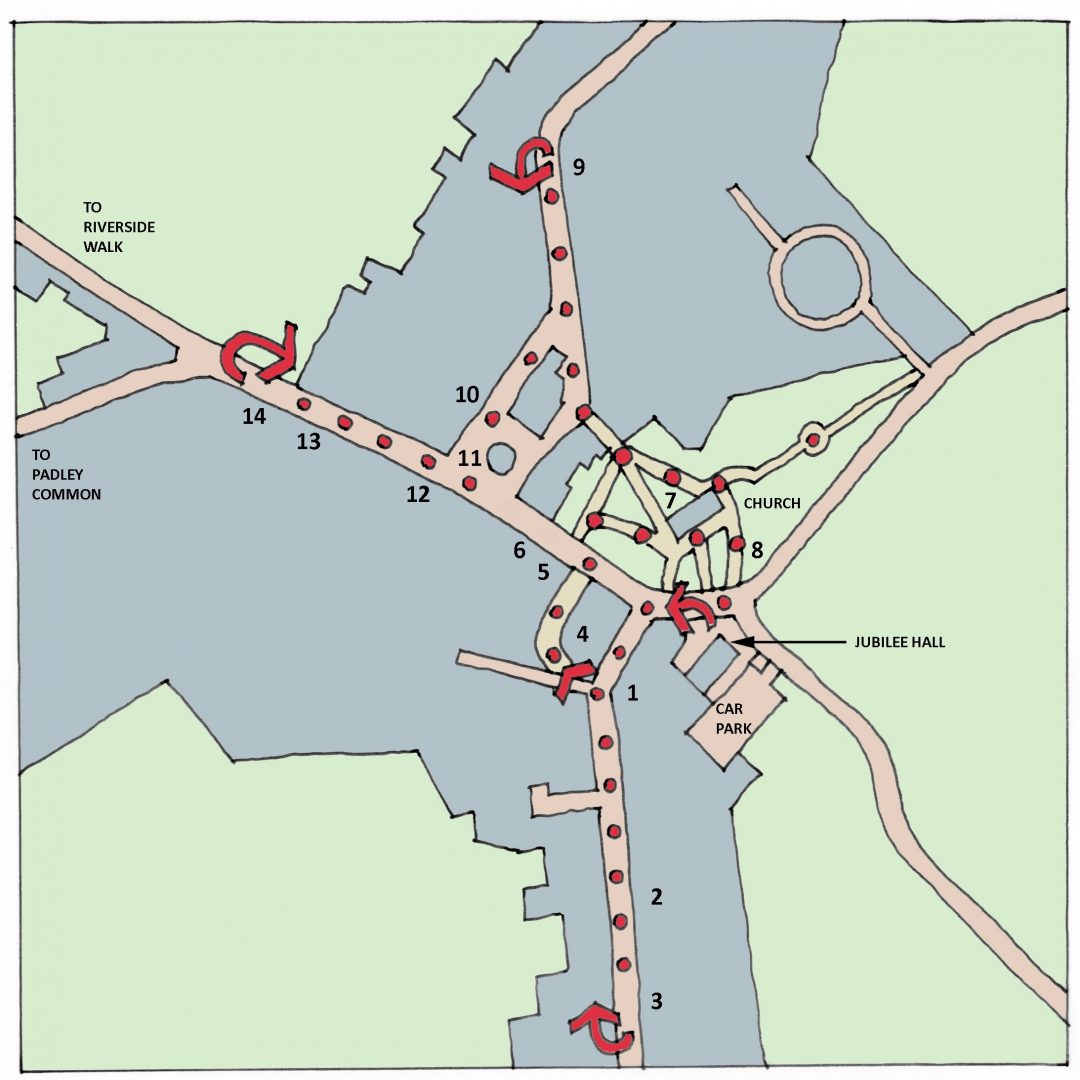 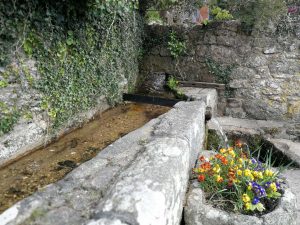 The granite lined stream running between low granite walls is known as Turnlake which may be a corruption of Town Lake, the first Town water supply. It may also refer to the diversion of water at this point for a leat travelling over O’er Hill. 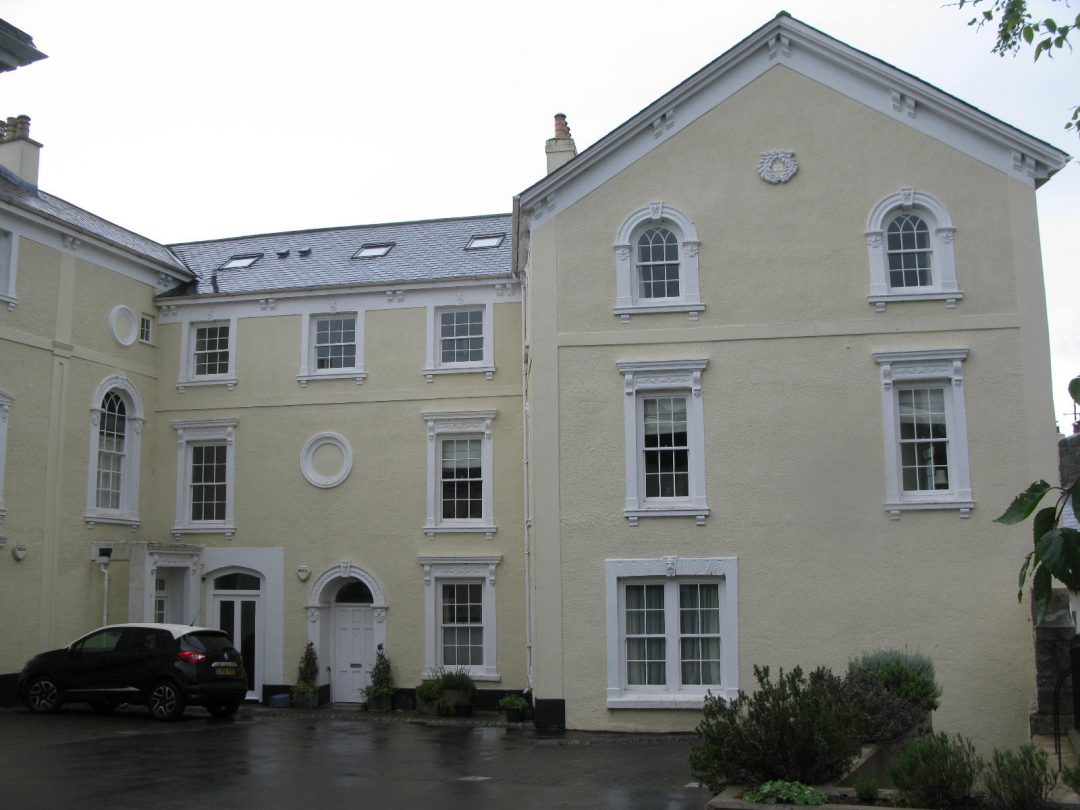 Moorlands (14), was one of the woollen factory buildings mainly used for finishing cloth. Much trade was done with the East India Company and the last military order was for horse blankets in the Crimea. When the factory closed in the late 19th century the building became a hotel and in the early 2000s it was converted to flats. 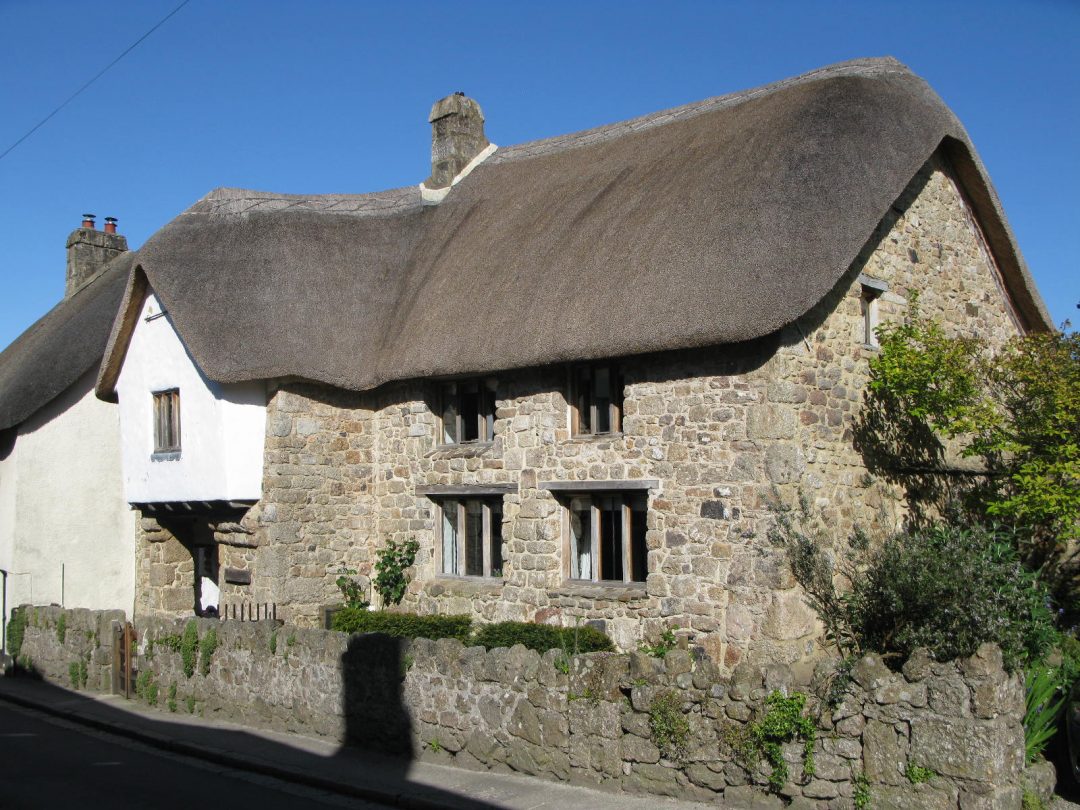 Bishop’s House (9) is a late medieval cross passage house and is Grade 2* listed. It was so called as it is said to have been associated with Bishop Branscombe who dedicated the Church in 1261. Note the oriel window on the upper floor over the porch. 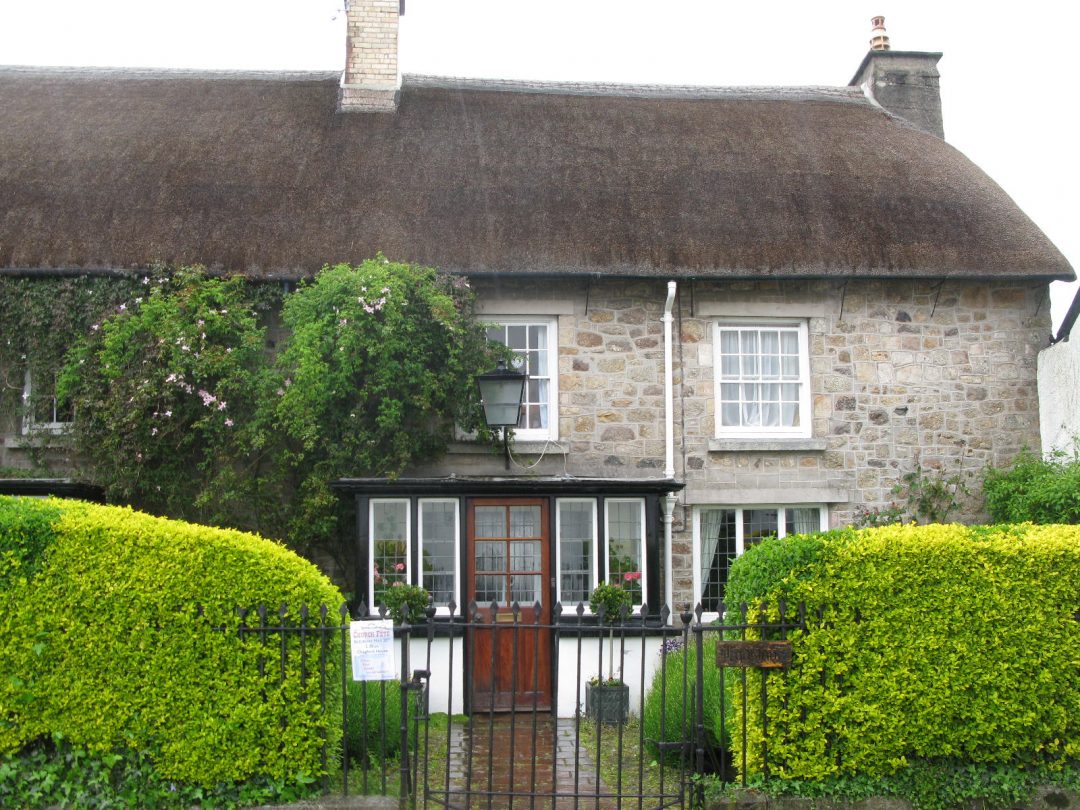 Lydstone, which is attached to Kings Arms Cottage. Together these two homes originally formed a coaching house with a courtyard behind, known as the Kings Arms Hotel. If you look carefully through the rails of the gate you can see the original cobbles over which pony and traps would have travelled taking visitors onto Dartmoor. The door which exists today would have been an open archway, and the trap would have been pulled through what is now the central hall of the house, from the courtyard at the rear

The school (2) next door was opened in 1861 on the site of a Care House for the poor of the Parish. The room was 46ft by 16ft holding approximately 150 children. The school was enlarged as numbers increased to 180. The Primary School moved to the present site on Lower St. in 1971 when the Secondary School pupils moved to Okehampton 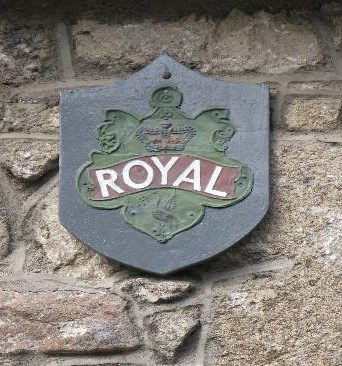 The insurance plaque on no. 41, which was once the White Eagle Inn. Prior to 1900, these plaques indicated to firemen that the building was insured and that they would be paid for saving the building. 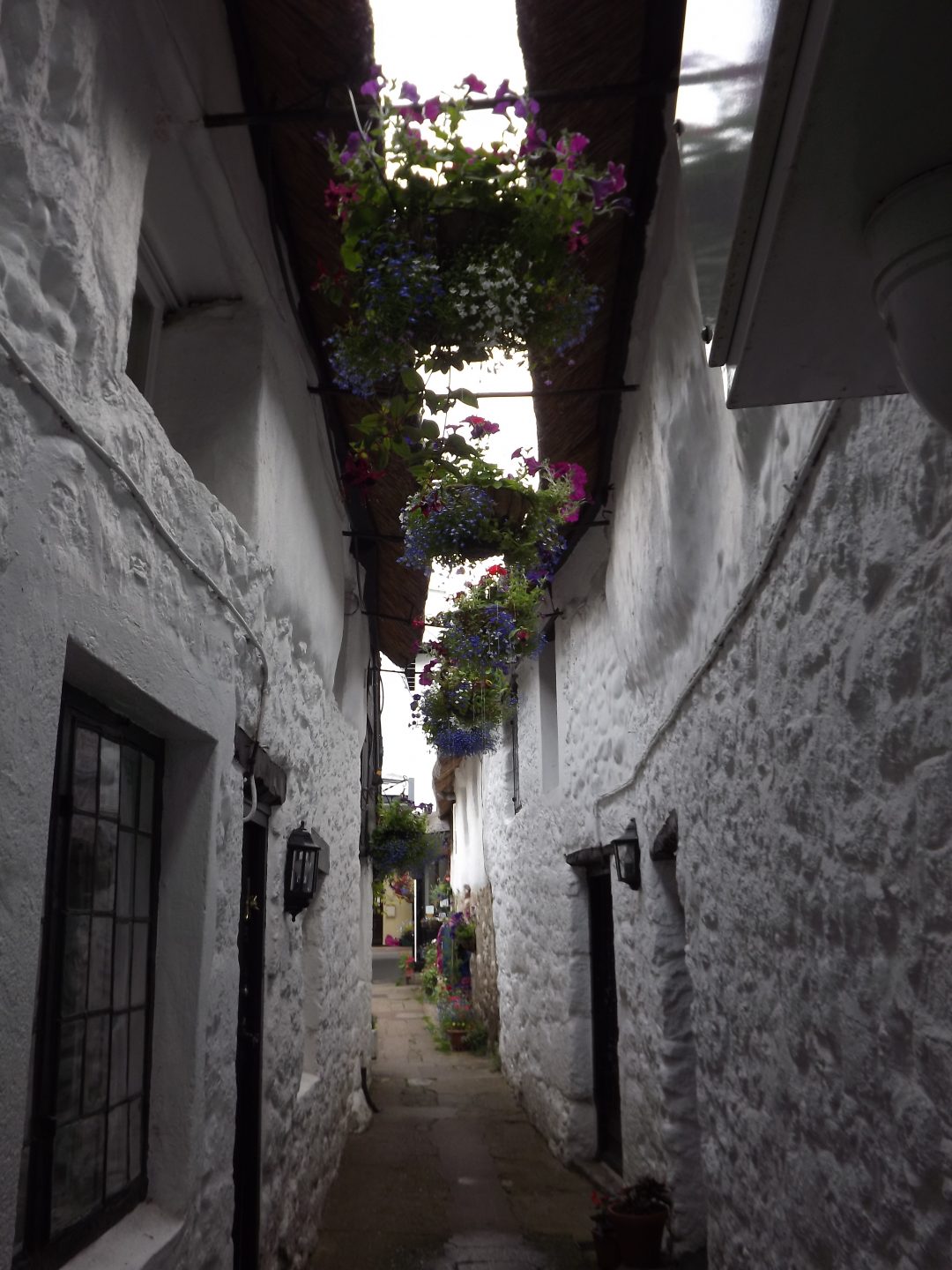 Store St. known as the Drang (4). You will see small doors on the right as you proceed down the Drang which were the entrances to pigsties and stables. 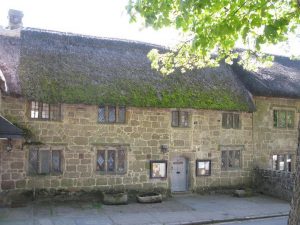 Endecott House (5) which is 15th century and Grade 2* listed. It was administered by the Churchwardens and used by Church Guilds as well as for brewing Church Ales. Later it became a Care House where the poor of the Parish were housed. In the late 18th century a schoolroom was created upstairs while the poor were cared for on the ground floor. A stone staircase on the outside led from the ground floor to the upper floor and although no longer there, if you look carefully, you can see the stone work indicating where the upper floor was. In 1853 an infants’ school opened on the ground floor while older children were taught on the first floor. After the move to the school in New St., Endecott House continued as an infants’ school until 1936. Previously known as St. Katherine’s House after the Patron Saint of Tinners, it was named Endecott House following refurbishment in the 1980s in honour of John Endecott, first governor of Massachusetts, who emigrated from Chagford in 1628. It is administered by a group of trustees and used for a variety of events. A charity coffee morning is held here every Saturday throughout the year, giving the visitor a chance to view the interior of this historic building. 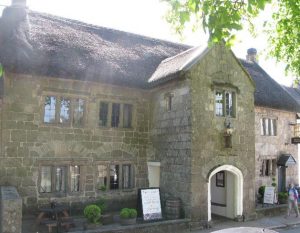 The Three Crowns (6) is early Tudor and Grade 2* listed. It was owned by Sir John Whiddon who died in 1575 - his tomb is in the Church. His daughter, Mary, left her home here to cross to the Church on her wedding day. She was shot by a jealous suitor as she left the Church after the ceremony. It is believed that this inspired R.D. Blackmore to write his story, Lorna Doone. In 1643 a skirmish took place between Royalists and Parliamentarians. Sidney Godolphin, 33, a poet and MP for Helston in Cornwall was shot and carried to the porch here. Thus, said Lord Clarendon “leaving the misfortune of his death upon a place which could never otherwise have had a mention in the World”. In the 19th century it became the Black Swan and later the Three Crowns. 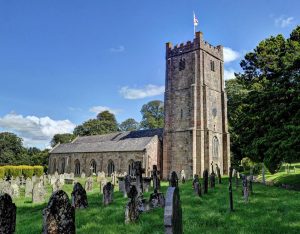 Inside the Grade 1 listed Church you will find all the information you need for a self-guided tour (or visit the St Michael’s pages on this website here ). 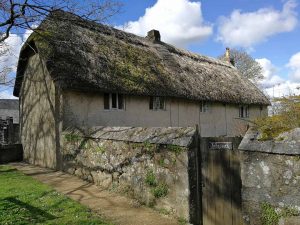 This long house , Bellacouch (8), is one of the oldest in Chagford and possibly an early home for the priest. 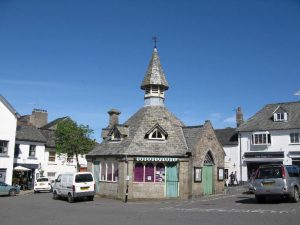 The octagonal Market House in the centre of the Square was built in 1862 to replace the Shambles, a thatched building which fell into disrepair. An early Charter for Fairs and Market in the Town was granted by Henry VIII. The toll board, now in Endecott House, shows that it cost three pence to enter a cow or calf, two pence to sell from a cheese cart and a penny to sell nuts. It was to here that the smelted tin was brought twice a year to be assayed, stamped, taxed and sold. 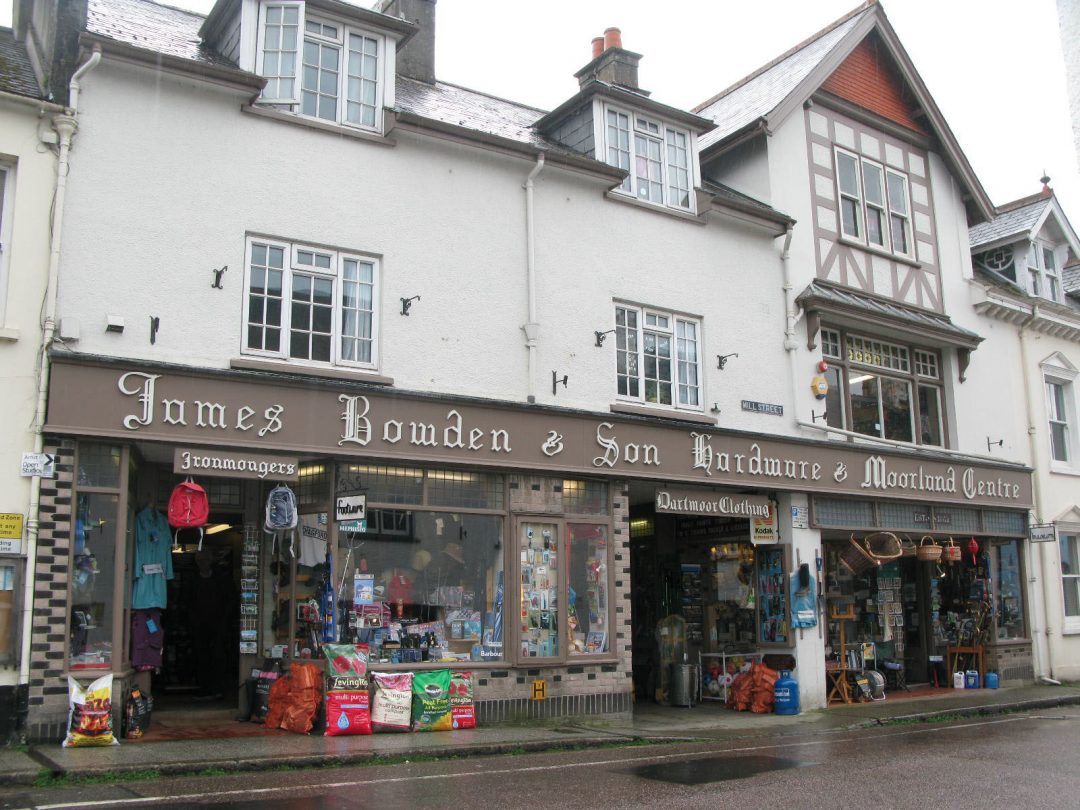 Bowden & Son was the Vulcan Ironworks making agricultural implements in 1862, later becoming an ironmonger’s. In 1922 they constructed the first radio valve set in Devon and queues formed to hear it. A hand operated fire engine was kept here and horses had to be caught and harnessed before it could be used. Bowden’s ran a bookmaker’s from 1960-1970 in a cottage to the rear of the shop. They expanded into Bolt’s the Grocers, the premises next door, in 1971. 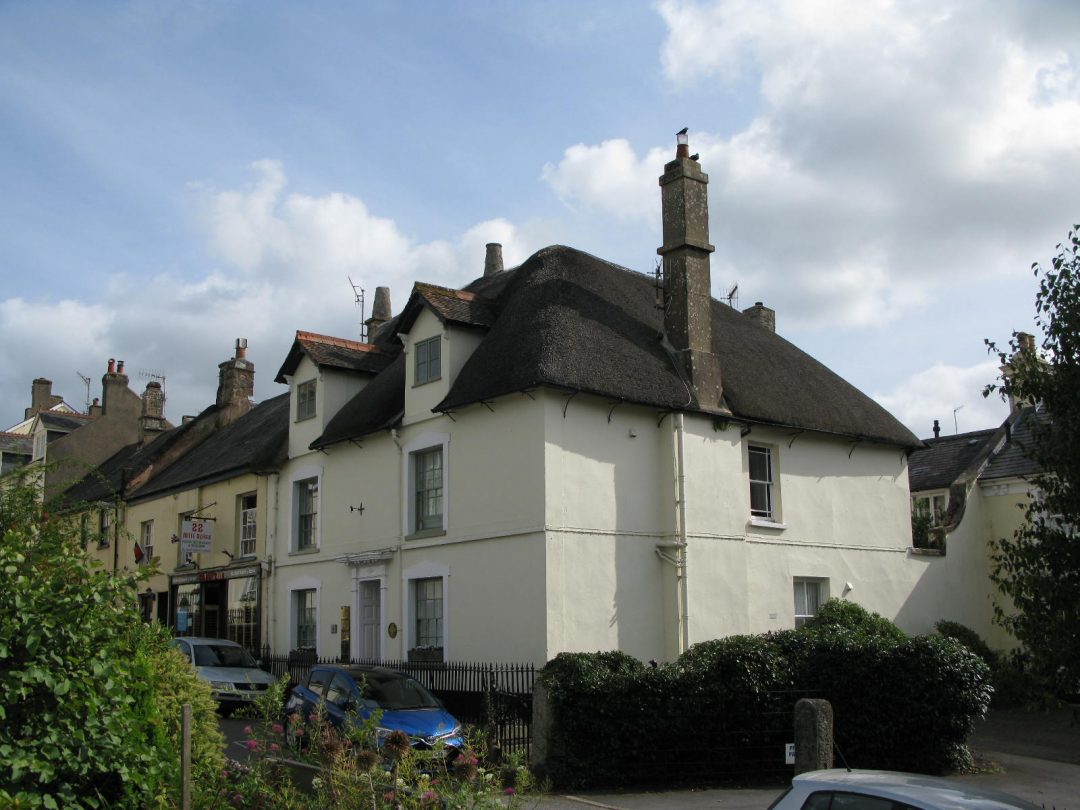 Lawn House (13). The original builder and occupier is uncertain. It may have been built by the mill owner John Berry, who was held in great esteem, “being second only in the County in importance to the Earl of Devon” The Lawn is across the road, and is now the town Bowling Green.