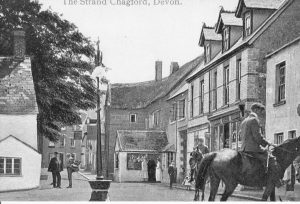 A large house stood here on the 1841 Tithe Map which was later called Marlborough House. Lloyds Bank was here until 1918. Splatt, Butcher and Dairyman until the 1950s can just be seen built out from the Three Crowns. Gales then expanded into here from next door and ran a gentleman’s outftters until 1968. Chorley’s continued after this with shoes and clothes. It then became Chagford’s – Mens clothing with Colin Haxton; Second Chance – Nearly New clothing with Mary Stephenson; a Hairdresser with Ellie Mitchell and All Found in Devon , an information centre with Accommodation details and locally made gifts. Jim Forsey’s Moorland Dairy followed. 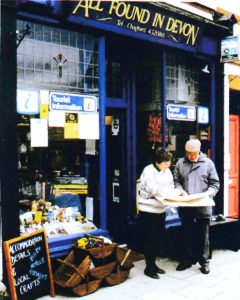