1553: The Inventory of Church Goods in the reign of Edward VI , 1553, records “Parish of Chagford with the Chapel ol South Tenton, “ffyve belles in the churche and one bell in the chapel of Southteyn.”

1765: On 12 August 1765, a license was decreed by the Bishop of Exeter to cast the ﬁve bells into six. The work was done the following year by Thomas Bilbie of Cullompton. In 1877 a treble and second were added making a peel of eight. 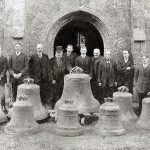 1914: During 1913, when it was found that the old oak frames had become unsafe, the bells were removed and a new frame constructed by Messrs W. Aggett of Chagford. The bells were recast to form a prefect octave by Messrs. Taylor and rehung in December 1914 and January 1915, all

The Service for the blessing of this peal was held on Wednesday 3rd February 1915 when it was exceedingly wet and windy.

1961: as part of the work carried out to mark the Septcentenary of the dedication of the church, a new Ringers Gallery was built at floor level to allow for a Choir Vestry to be constructed at the base of the tower.

1980: further work was carried out on the bells by Arthur Fidler in memory of Percy Rice, Tower Captain for 33 years, who had died the previous year. A new clock and an oak table were installed in the belfry in his memory.

2000: the bells were silenced while rotten beams below the bell frame were repaired. An appeal raised over £50,000 for this work in 11 months. 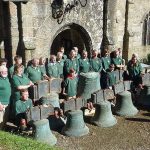 2016: The bells were removed for much needed renovation and shipped to the John Taylor and Co bell foundry in Loughborough to be cleaned and updated. The bells themselves were in excellent condition, however, there was much needed work to be done to the mechanisms. The old headstock, which is the part used to hang the bell, was made out of wood and was replaced with cast iron. The frame within the tower was also made of oak, and this has been replaced with cast iron.

Weights and prices of bells sold in 1537

Inscriptions on the Bells